The Chapel Hill Country Club is a private membership club with fine dining, 18 hole Championship Golf, an extensive and highly active tennis program for all ages, as well as special events for members throughout the year.

The Chapel Hill Country Club boasts an unmatched warm and welcoming atmosphere. With many young families, the member community is thriving and growing while cherishing a broad foundation of long-standing members, many of which have children and grandchildren that are members.

Located in the heart of Chapel Hill with convenient parking and easy access to several main thoroughfares, it is truly a home away from home for members.

Steeped in history and tradition, Chapel Hill Country Club is the only private country club in historic Chapel Hill, North Carolina. For over 90 years, our members have enjoyed a fellowship and sense of family which makes this club so unique. Like most clubs, we offer great golf, a stately clubhouse and resort-style amenities including tennis and aquatics. Our Club is not merely a facility; it is “home away from home” for our members. One visit and you will experience what sets Chapel Hill Country Club apart- our members! While the sense of community and place of belonging are a part of every membership, a variety of membership levels are offered to draw together members of all ages and interests.

Golf members enjoy the beauty and challenge of our 18-hole championship golf course and full privileges to all the Club offers. In addition to the private golf course, tennis facilities, and a skilled culinary staff ready to cater to your desires, you become a part of an active social community with a calendar full of events only available to members.

Chapel Hill Country Club is home to one of the top and most active tennis programs in North Carolina. The tennis facilities at Chapel Hill Country Club provide members with 10 of the best maintained clay courts in the area, 4 newly resurfaced hard courts and pickle ball. The tennis program and professionals provide a haven for tennis enthusiasts to enjoy friendly matches or serious competition and an environment that encourages growth and learning as well as a strong social component. Sport Members also enjoy the newly renovated pool, dining privileges and all the social events throughout the year.

Social Membership provides access to the pool, Club dining, and the exclusive social events that make membership at the Chapel Hill Country Club extraordinary. With the best newly-renovated outdoor pool in Chapel Hill, you and your family can enjoy the day poolside. In the Clubhouse, Award winning Executive Chef Gregory John presents dining to suit all occasions from lunch with golf and tennis friends, family time, business lunches, holidays and your private events.

Originally designed by Gene Hamm, and re-designed in 1999 by John LaFoy, the course features 18 distinctive holes with challenging hills, valleys, creeks and ponds surrounded by a peaceful and scenic neighborhood.

Golf Members have open access to practice putting and chipping greens, a practice bunker, and driving range with both grass and mat tees. The Golf Pro Shop provides bag and cart storage as well as an excellent selection of apparel and clubs, as well as customization, club repair and special order services. Our golf staff strives to assist each member in providing the greatest level of enjoyment of the game.

The greens were replaced with Champion Bermuda Grass in 2017 and are thriving beautifully. Come experience a great game on our new greens!

Check out our Junior Golf video!

The Chapel Hill Country Club is home to a thriving tennis program with 10 clay courts and 4 hard courts. Many members compete in USTA, Interclub or Women’s Triangle Leagues. Children ages 4 and older can learn and practice new skills with junior clinics. Private and semi-private instruction is available for all ages. Social playing groups help facilitate members getting together for a friendly match. Pickle Ball courts are a new addition providing a fun and lighthearted racquet game for both kids and adults. A complimentary ball machine may be reserved for use on either the clay or hard courts, and a fully stocked pro shop accommodates members’ needs in apparel, shoes and accessories as well as next-day or lunch hour restringing services.

The Chapel Hill Country Club’s pool was renovated in 2016. It features a beach entry play pool, an 8-lane competition pool as well as a deep pool with a resort slide and diving board. The pool is designed to maximize enjoyment and safety. Multiple areas are arranged to accommodate play, fitness, and relaxation for all ages while maintaining a clear view of all areas for lifeguards and parents.

The pool is open every day 10 AM until 8 PM Memorial Day until Labor Day. If weather permits, the pool is open on weekends beyond these dates. Chapel Hill Country Club is the home pool for the CHCCR Sharks Swim Team.

Chef John was born and raised in Eugene, Oregon. Growing up in the heart of the Willamette Valley he developed a deep respect for locally sourced food, beer, wine and distilled spirits. The region supported the farm to fork philosophy from an early point in his culinary career. Chef John worked many years in Oregon prior to attending the Culinary Institute of America in Hyde Park, NY where he met his culinary partner for life and wife, Laurie. They have three children Lexi, Ashlyn and Andrew.

Chef John has been an executive chef in private country clubs for over 22 years while spending time at Fort Wayne Country Club, The Club at Mediterra, Greensboro Country Club and his current position with Chapel Hill Country Club.

Chef John has won numerous culinary awards at the State and National level. He was a national spokesperson for the National Pork Council and had the honor of cooking at the James Beard House in New York, NY.

Chef John is most proud of the numerous culinary professionals that have worked as his Sous chefs their accomplishments as they become culinary leaders for the next generation of young chefs.

Chef John believes food is more than feeding people; it’s about making lasting memories for you and your guests. 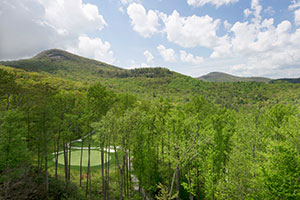 Old Edwards Club and The Saddle at GlenCove