Jake Gives the Edge to The USA!

Why The USA Team?

One of the things we’ve learned about the Ryder Cup throughout history is that no matter which team looks to have the advantage, the competition is anything but predictable. We’ve seen some shocking turnarounds and ‘script flipping’ over the years by both the United States and Europe. Who could forget the USA’s “Meltdown at Medinah” in 2012 or the Ben Crenshaw-captained “I have a good feeling about this” comeback in 1999, highlighted by Justin Leonard’s incredible putt at The Country Club in Brookline, Massachusetts.

In an effort to predict the unpredictable, here’s how I see things shaping up for the 2018 Ryder Cup, which begins Friday outside of Paris.

It helps to break it down into relevant categories and identify each team’s strengths. Let’s start with the Captains – Thomas Bjorn for Europe versus Jim Furyk of the United States. Both have international competitive experience as well as the respect from the golf community around the world. I give a slight edge to Furyk simply because he has been deeply immersed in the Ryder Cup process since the infamous USA defeat in 2014.

An easy one to consider is ‘home court’ advantage. That goes to Europe since the competition is in France. And don’t discount how huge this advantage always is!

The weather also can play a factor. If the weather stays relatively nice, I give the advantage to the USA. If it turns nasty, that advantage flips to Europe.

Overall team leadership is a tricky one, especially since Tiger Woods is once again on the USA team. Punctuated by his emotional victory at the Tour Championship on Sunday, Tiger has re-emerged as a dominant force and personality in the game, and because of that I give a slight nod to the USA. He’s more compassionate, helpful and willing to teach this younger group of players – who all grew up watching and idolizing Tiger.

I would give the advantage to Europe in “Ball Striking,” as Justin Rose, Sergio Garcia, Rory McIlroy, Tommy Fleetwood and Francesco Molinari are some of the finest in the world. I give the USA the nod in “Putting” and “Short Game.” This team has some incredible short-game masters led by Mr. Wizard himself, Phil Mickelson.

“Momentum” from the USA’s win at Hazeltine in 2016 will help them in Paris but in the ”Clutch Performer” category, I give the edge to Europe, whose world #1, Justin Rose, is one of the most consistent and reliable players in the game today.

Adding all of those up, I predict a 15-13 win for the United States. I think it will be closer than most think, and as compelling as always! 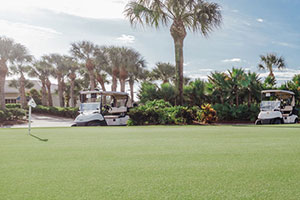